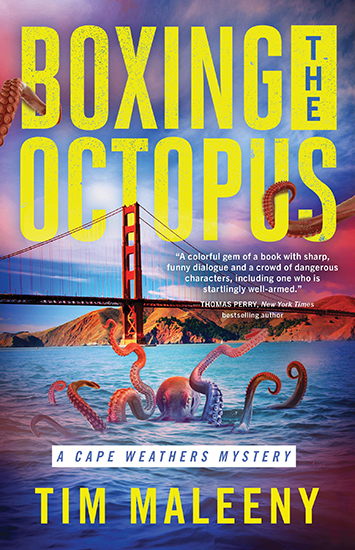 The latest in the Cape Weathers series

“Boxing the Octopus is a great mystery novel, but it is also terrific literature. One cannot read it without appreciating how sharp a writer Maleeny is.”
—Bookreporter

At the height of tourist season, an armored car drives off a crowded pier and sinks to the bottom of San Francisco Bay. By the time divers find the wreck, the cash is gone and the driver has vanished. The police are convinced it’s an inside job, but local merchant Vera Young, whose boyfriend drove the armored car, claims it was much more than a simple heist.

Vera swears the missing driver is innocent and wants him found before the police can throw him in jail. Private investigator Cape Weathers reluctantly takes the case but warns Vera that her boyfriend is likely guilty—or dead. What starts as a manhunt uncovers a criminal conspiracy of money laundering, illegal drug testing, and a network of corporations willing to do anything to protect their stock price. It’s a case that Cape can’t get his arms around, and his relationship with Vera is getting complicated while the list of people who want him dead is getting longer.

Cape turns to his deadly colleague Sally to watch his back, and together they follow a trail of corpses from the San Francisco waterfront to manmade islands in the South China Sea, where a secret lab is playing roulette with the human genome. Before they can discover who’s behind it all, they’ll have to confront the Chinese Triads, Russian smugglers, a drug-dealing pirate, and a giant Pacific octopus named Oscar.

Boxing The Octopus is a runaway tour of San Francisco’s underworld which reminds us that when things get out of hand, having eight arms is always better than two.

Read a complete synopsis and review from Bookreporter

“Maleeny provides some fast-paced, cheeky fun, along with a splash of social consciousness.”
—Publishers Weekly

“Maleeny moves his colorful cast around with giddy panache. His detective’s fourth caper is a Hiaasen-esque delight.”
—Kirkus Reviews

“Serious mysteries written with a light touch, the Cape Weathers novels have a Carl Hiaasen feel to them, despite being set on the other side of the country from Hiaasen’s Florida.”
—Booklist

“Boxing the Octopus is a great mystery novel, but it is also terrific literature. One cannot read it without appreciating how sharp a writer Maleeny is.”
—Bookreporter

“Boxing the Octopus is a colorful gem of a book with sharp, funny dialogue and a crowd of dangerous characters, including one who is startlingly well-armed.”
—Bestselling Author Thomas Perry

“With a fascinating caper, a twisted mystery, a grizzled PI with a kick-ass Ninja chick sidekick, and a complex plot worthy of Leonard’s heir, Tim Maleeny bursts back onto the crime fiction stage with a surefire winner. Boxing the Octopus features a dizzying array of well-developed characters both friend and foe—and cephalopod, of course—who catapult the story forward. Thrilling, amusing, and thought-provoking, I couldn’t stop reading! Can’t wait for Cape and Sally’s next adventure.”
—Bestselling Author J.T. Ellison