The scream tore through the building like a pregnant nun on her way to confession. It bounced off the walls, rattled the windows, and woke up everyone in the neighborhood.

Ed Lowry plummeted a hundred feet before he made any noise. The fire escape on the 20th floor was two hundred feet off the ground, so accelerating at thirty-two miles per second squared, he was falling at nearly forty miles an hour and covered half the distance to the ground before he grasped the real gravity of his situation and started screaming.

It was probably the sight of the penguin that jolted him back to reality and knocked some air back into his lungs.

The penguin was a sculpture, rising up from a fountain that sat dead center inside the main courtyard of Golden Towers Apartments. Baby penguins nestled on either side of the mommy penguin, whose beak was pointed triumphantly towards the heavens, a soaring symbol of the strength and nobility of motherhood, carved lovingly in marble and bronze. It was conical, shiny, and sharp as a mother’s tongue. 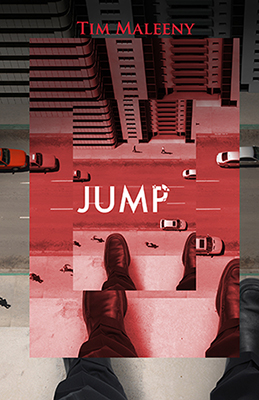 Ed probably realized he wasn’t going to merely hit the driveway, which was bad enough, but was headed straight for the penguins. Then he let loose a scream that could wake the dead, though it didn’t stop Ed from joining their ranks.

He twisted in midair and struck the penguin back-first with a sickening, wet noise that one witness described as the sound of a whale being dropped from a skyscraper. Ed didn’t look much like a whale when it was all said and done, but he was skewered like a fish by the upraised marble beak. Blood flowed down the body of the mother penguin, pooling at the feet of her young, turning the water of the fountain a deep wine red.

Sam McDougal was on the twentieth floor when it happened, so he wasn’t too surprised the cops wanted to talk to him. After all, he’d been a cop himself. He’d worried that he would miss the job when he retired, but so far life as a civilian was full of surprises. Like your landlord taking a header off the top floor of your building.

Sam’s first day of retirement, and already they wanted him back on the job.