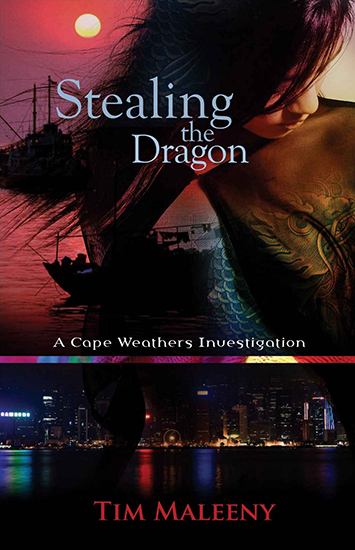 Soon after an ancient talisman is smuggled out of Hong Kong, a container ship filled with Chinese refugees runs aground on Alcatraz, the crew murdered.

The Chinese Triads suspect one of their own, a female assassin named Sally known to have a complex relationship with a San Francisco detective named Cape Weathers. But when Sally goes missing, Cape becomes the focus of the Triads’ attention, and soon the police and FBI have him on their radar. Cape quickly realizes he’s screwed if he doesn’t find out what really happened on board the ship.

He seeks the aid of two neurotic cops, a drug lord, an autistic computer genius, a mayoral candidate, and a reporter with sentient hair.

From there it all goes to Hell.

“Readers will want to see more of Cape and Sally.”
—Library Journal

“San Francisco comes alive in Tim Maleeny’s engaging and confident debut thriller, a dark but witty book that showcases a new talent that is likely to please many readers. Stealing the Dragon is an entertaining story that combines a gumshoe mystery in the tradition of Dashiell Hammett with the exotic action of Trevanian.”
—David J. Montgomery, Mystery Ink

“This is a wowzer. Cape Weathers is a young private investigator in San Francisco investigating two incidents. First, a ship from China full of illegal refugees runs aground when the crew is murdered. Then Cape’s best friend Sally disappears, and the Chinese Triads, an organized crime group, thinks he knows where she is. What he doesn’t know is that Sally is a trained assassin, and the chapters alternate between Sally’s back story, which is completely fascinating, and the refugee mess in Chinatown that is compounded by a hotly contested political battle for Mayor. Intricate plotting, appealing locations, unusual characters, and a touch of humor combine to make this one amazing debut novel.”
—Stacy Alesi, AKA The BookBitch

“Yay, a brisk caper with Jackie Chan echoes involves former cop Cape Weathers, a PI, in a plot stretching from Hong Kong to San Francisco and featuring a fabulous sensei named Sally. Though action driven—the opener aboard the ship is a stunner—the characterizations are strong, and Cape and Sally are keepers.”
—The Poisoned Pen

“This novel hits the ground running and never lets up. Maleeny takes a lush, San Francisco-style noir and turns it on its head with plenty of gusto.”
—Sheila Leitzel, Bookfetish

“In Stealing The Dragon, first-time novelist Tim Maleeny gives us an exercise in pulp, noir and kung fu, all rolled into one: three great tastes that go great together. I, for one, want more Cape adventures, and I want them now.”
—Bruce Grossman, Bookgasm.com

“Take one smart, funny detective. Add one beautiful, deadly Chinese assassin. Mix in an ancient secret ingredient that people will kill for, then stir violently. I gobbled up the chapters, and an hour later I was hungry for more. Tim Maleeny delivers.”
—Best Author Marshall Karp

“Stealing The Dragon is a raucous, sizzling, no-holds-barred delight from the get-go. Tim Maleeny propels readers down the darkest alleyways of Hong Kong, Tokyo, San Francisco, and the human condition with scathing wit and style. Keep an eye on your socks—this is a debut sure to knock them right the hell off with an auspicious bang.”
—Author Cornelia Read

“Stealing The Dragon is a crime noir tour of San Francisco’s Chinatown, conducted by a occasionally abrasive but nonetheless likable detective and a haunting, unforgettable assassin who lead the reader down alleys which are worlds away from the usual tourist haunts.”
—Joe Hartlaub, BookReporter.com

“Stealing The Dragon is Dashiell Hammett by way of Jerry Bruckheimer—with some Jackie Chan thrown in for good measure. If you like your private-eye adventures fast, funny and action-packed, you’re going to love this book!”
—Author Steve Hockensmith

“Crisp. Sharp. Great characters. A page turner with appeal to both men and women readers. Tim Maleeny’s first is just the beginning for this talented new writer.”
—Author Rita Lakin